The Bandoneon on Travel by the German photographer Lisa Franz, author of the book A Year in Buenos Aires and Argentine musician Facundo Barreyra, is based on the cultural and artistic exchange in which, through the bandoneon´s travels, Argentinian and European cultures intimately get to reflect on each other by the medium of art: Telling stories with photographs, literature and with the unique voice of this instrument, that was born in Carlsfeld, Germany and developed from the twentieth century on in Argentina.

The project has as it´s target to create awareness of the deep connection between Argentina and Europe. This connection represents the bandoneon instrument in a unique way, because it was invented in Germany at the end of the 19th Century, in Carlsfeld and it´s today - introduced by European immigrants - played mainly in Argentina, representing an important part of local culture.

Lisa Franz and Facundo Barreyra have put together based on the poem " Morning Light " by the Austrian poet and writer, Stefan Zweig, several pieces of music which can be heard on the CD of the same title.

The format of the project is planned as an audio-visual concert, where Facundo Barreyra plays the bandoneon, Lisa Franz reads from her book, while images are projected from her photo series The Bandoneon on Travel, which have been taken by the photographer and author during more than ten years in Argentina.
Even other musicians and artists may be invited to the concert. The project has been developed to serve different proposals to interact with the public of all ages and cultures in areas of different characteristics.

The project The Bandoneon on Travel consists of five components that can be combined:

The premiere of the event in Croatia in 2013, on the island of Brac, was perceived very positively as well by the audience as by the city of Sutivan.
Also the project was realized in Cologne, Hamburg, Northeim, Germany and in Buenos Aires, Argentina at the International Foundation Jorge Luis Borges, for the Museums Night, which is organized by the Ministry of Culture of the city.
In 2014 the city of Sutivan, on the island of Brac had invited the project for the local Jazz Festival.
The European tour of Lisa Franz and Facundo Barreyra, in the Summer of 2014 was supported by the Argentine Foreign State Office and had been declared "of cultural interest“.

In 2018 Lisa Franz and Facundo Barreyra were invited to Thun, Switzerland to create with The Bandoneon on Travel an entire week of activities around the Bandoneon and it´s fascinating heritage. 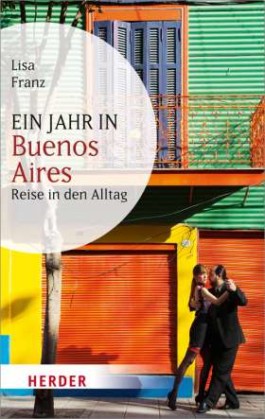 Quién soy yo?, Who am I? - In Buenos Aires Lisa Franz asks herself this question in a new and urgent way. She first encounters the longed-for city as a great juggernaut, as a monster, which in the course of a year changes into the opposite: Buenos Aires changes - from monster to muse. And with the city, Lisa also experiences a very peculiar, wonderful transformation.